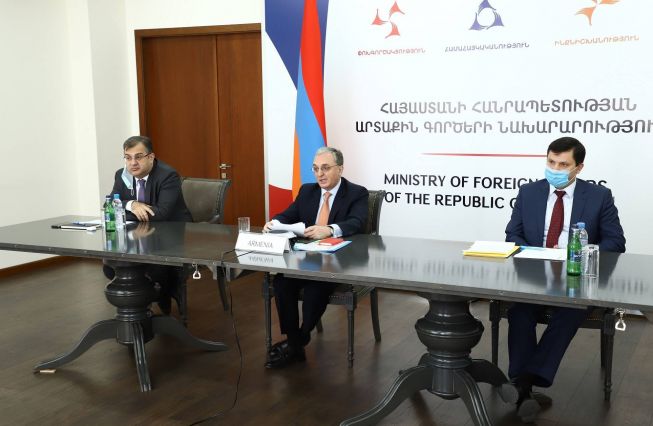 On September 25, 2020, Armenia’s Foreign Minister Mr. Zohrab Mnatsakanyan participated in the online informal meeting of the Council of Ministers of Foreign Affairs of the BSEC Member States hosted by the Romanian BSEC Chairmanship-in-Office focusing on “Enhancing cooperation post COVID-19: the need of innovative priorities of action to be addressed in the framework of the BSEC Organization”.

In his capacity of the Chair, Romania’s Minister of Foreign Affairs Mr. Bogdan Aurescu delivered opening remarks. BSEC Secretary General Mr. Michael B. Christides made an intervention outlining the recent activities of the BSEC PERMIS followed by statements of the Foreign Ministers of BSEC Member States. The European Commissioner for Neighborhood and Enlargement Mr. Olivér Várhelyi was also invited to the informal meeting as a special guest.

Expressing his appreciation to the Romanian side for the productive chairmanship efforts, in his statement Foreign Minister Mnatsakanyan reiterated Armenia’s support to the Romanian Chairmanship priorities and undertakings to successfully advance the agenda of the Organization. He thanked the Chairmanship for tackling a wide range of areas of cooperation within the Organization and particularly appreciated its intention to hold a BSEC High Level Conference on regional cooperation for the implementation of SDGs as these universal goals are cross-cutting and concern all sectors of economy and every aspect of life, which have been challenged by the outbreak of the COVID-19.

Stressing that cooperation between governments is needed to curb the pandemic and expedite exit from the crisis, Armenia’s Foreign Minister indicated that the regionally and internationally coordinated policies can facilitate recovery and rebuilding of socioeconomic systems in inclusive and sustainable ways and help prepare for future risks. He further stressed that BSEC, as a regional organization, can be a platform to advance the regional cooperation by bringing together all the relevant stakeholders to share best practices for addressing consequences of the Covid-19.

The Minister reiterated that BSEC is designed as a forum for regional economic cooperation and partnership, and attempts to over-politicize and inject bilateral differences including biased conflict narratives into the agenda of the Organization and its related bodies are detrimental to its principles, against the Charter and will not serve its purpose.  Regretting Azerbaijan’s systematic attempts to abuse thematic platforms of multilateral cooperation including the BSEC, Mr. Mnatsakanyan has strongly condemned these attempts, which are totally unacceptable and affront to the Organization and its membership principles.

“While many nations around the world have been struggling with the pandemic, Azerbaijan has recently launched aggression in the north-east Armenia-Azerbaijan border, which clearly demonstrates why this particular Member State has opted not to support the UN Secretary-General’s appeal for a global ceasefire during the outbreak of the COVID-19 not only in words but also in deeds. Furthermore, the same Member State publicly threatened to launch missile strike at the Armenian nuclear power plant. This reckless and irresponsible behavior is absolutely incompatible with international law and the core values of civilized humanity,” Minister Mnatsaknyan said.

Considering new regional economic trends and worldwide economic transformation in the post-pandemic era, he stressed that the BSEC economic agenda of 2012 needs to be revisited to reflect these new tendencies and the wider global economic agenda including SDGs and emphasized that further strengthening of the Organization can only be achieved by a comprehensive and continuous reform process with the solid political commitment of the Member States to transform BSEC into a stronger and a more dynamic institution.

Armenia’s Foreign Ministers concluded that with the unprecedented challenge posed by the COVID-19 pandemic Member States must not only join forces to mitigate, counter and prevent its spread and consequences, but also take steps towards building a viable and forward-looking cooperation within the BSEC framework for the post-pandemic period.